Among other tasks, Sarens was responsible for the transport and installation of a 5,000 cubic metre tank, which will be used for the storage of chemicals such as AgraLi or BlueSulfate

Sarens, world leader in heavy lifting, engineering transport and a reference in crane leasing services, has been directly involved in the expansion work being carried out at Evonik’s chemical plant in Antwerp, by transporting and contributing to the installation of a new storage tank for chemical materials, with a capacity of approximately 5,000 cubic metres.
This plant is one of the most important in the world in terms of production capacity of silicones for the technology industry, printing inks or ecological herbicides, but also in terms of surface area -109 hectares in total-, and the second most important of the Evonik Group after the one located in Germany, and is responsible for the production of products in the Nutrition&Care, Resource Efficiency or Technology&Infrastructure areas, among others. 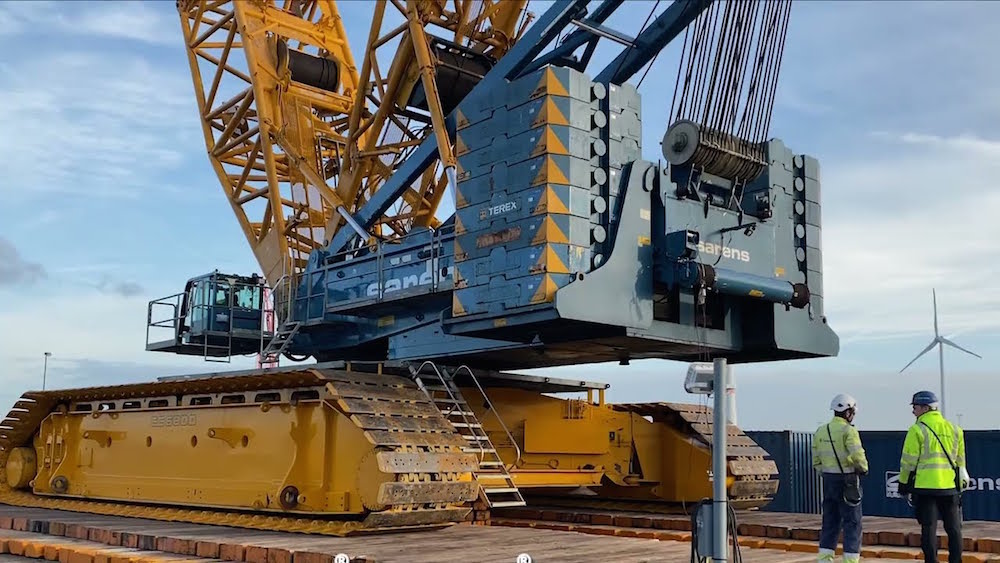 Sarens worked in this project together with Ivens, Europe’s leading manufacturer of petrochemical storage solutions, to transport the tank from the company’s Antwerp facility to the final location. This involved loading the tank, which is 16m high and 20m wide and approximately 175 tons, onto a barge and crossing the city canal to the Evonik plant.
This work required an important prior engineering study due to the need of adjusting the maximum weight that the floor of the petrochemical factory could support without risk, and to the presence, at the port of destination, of a windmill that had to be stopped to avoid slowing down the unloading operations.

Once at the destination facility, Sarens used the CC6800 crane, a model with a maximum load of 13,840 tons, which facilitates lifting, loading and unloading operations. This crane, chosen for its agility and manoeuvring precision thanks to its luffing fly jib, was transported to the job site from Sarens’ facilities located in Thuin in 50 trucks, and was assembled on site in five days. At the Evonik site, Sarens was responsible for lifting the newly transported tank onto a pre-built pipe rack using the CC6800 crane. This process was completed in just five hours, under maximum safety conditions. Click here to watch this project progress in video.

Sarens, originally from Flanders, has more than 100 years of history in the heavy lifting and transport industry, ever since its founder Frans Sarens started transporting tree trunks with a horse and cart. One hundred years later, it is the undisputed leader in its sector, having spearheaded transport projects in Belgium for the construction of the Albert Canal bridges, the new steel bridge outside Antwerp, or the recent transport of the historic Boeing 727 of the Vlaamse Hogescool VIVES VLOC in Oostende. Internationally, it has collaborated with companies such as NASA in the USA or Arcelor-Mittal in Canada, and has participated in large-scale projects, such as the construction of the Hinkley Point C nuclear power plant in the UK, where it used the SGC-250 crane, also known as “Big Carl”.