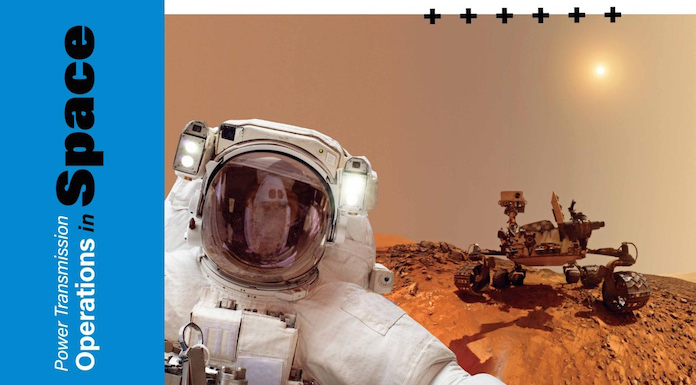 As humanity continues to push the boundaries of space exploration, it has become increasingly apparent that the harsh and unforgiving environments beyond Earth pose unparalleled challenges for power transmission (PT) components.  With information provided primarily by NASA’s Jet Propulsion Laboratory (JPL), Motion + Drives overviews the uniquely interesting topic of PT applications in space, through the journeys of NASA’s Mars Missions.

Earlier this year, NASA’s Ingenuity helicopter became the first aircraft to successfully conduct a powered, controlled flight on another planet.  The 49-centimeter tall, 1.8 kg, rotorcraft flew 3 meters off the surface of Mars, for a grand total of 39.1 seconds.  This milestone achievement in flight tested the design limitations of the helicopter’s parts, and further proved that operations in space require an unprecedented level of durability.  According to NASA, the battery powered device contains many unique components as well as “off the shelf commercial parts, that were tested in deep space for the first time with this mission.”

At the time this article is being written, Mars sits 395 million kilometers from Earth, and NASA asserts that only about 50% of all attempts to land on Mars, by any space agency, result in a success.  For Ingenuity, the success of arrival was quickly overshadowed by the next task; survival.  Nights in the landing zone, Jezero Crater, can fall below 90 degrees Celsius, testing the resilience of every part on the craft.

In order to create components and systems that will operate in the harsh environments beyond our planet, engineers must fully understand the principles of physics, some of which are purely theoretical.  Mars’ atmospheric differences created rigorous challenges for the mechanisms of Ingenuity, pushing design further than what is necessary on Earth.  This frigid environment has one third the gravity of Earth, and to make matters more complicated, Mars’ extremely thin carbon dioxide filled atmosphere is 99% less dense than Earth’s. With relatively few air molecules, generating enough lift was a key concern.  The 1.2-meter-wide, dual rotor blades were required to spin 10 times faster than a helicopter on Earth (2,800 RPM), but also needed to be incredibly light and stiff.  The blades were ultimately constructed using carbon fiber foam core.

The iconic flight of Ingenuity is only one aspect of a very large and complex set of systems developed to push the boundaries of human design and achievement.  Most importantly, for the purposes of Motion + Drives Magazine, it is a celebration for members of the global power transmission community who are routinely contributing to these awe-inspiring efforts.  Today’s companies are designing, producing, and equipping modern machines with power transmission components and systems durable enough not only to withstand space flight, but the alien environments of other planets.

Power transmission components destined for space exploration face their first dramatic test leaving Earth.  Ingenuity’s famed autonomous Mars flight came after it hitched a ride on the underside of the Perseverance Rover.  The equipment was sent into orbit on a United Launch Alliance Atlas V Rocket fueled with liquid oxygen and liquid hydrogen, producing over 860,000 pounds of thrust at liftoff.  In comparison, the most powerful rocket by lift capacity is the Falcon Heavy rocket.  According to its manufacturer, Space X, the Falcon Heavy produces more than 5 million pounds of thrust at liftoff, equal to roughly eighteen 747 aircraft at full power.  The massive forces at play create a unique set of endurance challenges for parts destined for space.

The Atlas V rocket carrying Ingenuity and Perseverance left on July 30, 2020 from the hot and humid space Coast of Florida in the United States.  The parts onboard endured the vibration, acceleration, gravity changes, pressure fluctuations, and the extreme heat of ascent before eventually reaching the frigid vacuum of space; an environment that can cause volatiles from materials to release and molecularly contaminate the space vehicle, its payload, in a process commonly known as outgassing.

In terms of material degradation however, the most significant factor within Low Earth Orbit (LEO) is Atomic Oxygen (AO), “a product of short wavelength UV radiation reacting with molecular oxygen.  NASA asserts that “AO oxidizes many metals, especially silver, copper, and osmium. AO reacts strongly with any material containing carbon, nitrogen, sulfur and hydrogen bonds, meaning that many polymers react and erode.”

Without the blanketing protection of Earth’s atmosphere, objects in space are exposed to the damaging effects of our own Sun.  Ultraviolet radiation and dramatic temperature fluctuations are only a small fraction of the challenges our components face.  For example, when exposed to the Sun, temperatures impacting the International Space Station (ISS) soar dramatically higher than the hottest temperatures ever recorded on Earth.  In 1913, Death Valley, USA, registered a temperature of 56.7C (134.1 F), yet, on the ISS, temperatures can reach as high as 121 C (250F).  Alternatively, dark side temperatures plunge to as low as -157 C (-250F), substantially below the lowest recorded temperature of any location on Earth’s surface; –93.2 °C (–135.8 °F), recorded on an Antarctic plateau.

The dramatic swing in temperature requires materials that won’t significantly expand and contract, yet are lightweight, durable, and cost effective.  Only a couple common materials regularly apply; aluminum and titanium.  In fact, these materials are so durable when mixed with other metals to form an alloy, they are not only routinely used in satellites, but operate in our deepest space missions. One relevant example are the aluminum wheels of the Perseverance Rover, which are complete with curved titanium spokes for support, along with the rover’s titanium tube legs.

Despite all our reliance on available materials and existing component designs, the continued push into harsher environments requires continual research into alternatives.   The conditions of space travel require mankind to reconceptualize the materials & designs used in power transmission components here on Earth.

Few industries require the custom design of new mechanisms completely from scratch; however, it is a central theme for space applications, along with reduction of mass and volume. When investigating drive systems in deep space, nothing encapsulates the complexity of space applications quite like the motion control equipment in NASA’s Mars Rovers.

The power sources used in deep space missions are unparalleled to common apparatuses here on Earth.  Systems are required to operate for decades while withstanding extreme temperatures, and providing heat and electricity to the crafts.  NASA’s space missions have been dependably powered using Radioisotope Power Systems (RPS); a space nuclear power system which converts heat from naturally decaying radioisotope materials such as Plutonium-238 into electricity.  Missions operating on RPS power, such as the Voyager 1 and 2, launched in 1977, continue working to this day, some 44 years later.

Currently, the vehicles operating on Mars are using a variation of RPS called Multi-Mission Radioisotope Thermoelectric Generators (MMRTG).  This power source combined with lithium-ion batteries power the everyday missions of the crafts, and as with any other power transmission application, there is a necessity to convert that electrical input into mechanical motion.

NASA’s robotic exploration of Mars required the unique challenge of re-imagining and designing proper actuators.  Rotary actuators are complex drive instruments comprised of a motor and gearbox, and have the primary function of driving the rover’s wheels, as well as operating the scientific instruments such as the robotic arms.  “The electric motor provides the energy to move the mechanism, the gearbox reduces the high output speed of the motor to a reduced speed and higher torque at the output shaft.” Upwards of 30 actuators are needed to provide motion controls on one rover.

For the initial stages of actuator procurement, NASA acquired 90+ actuators/stand-alone motor units for testing.  Mars Science Laboratory (MSL) actuator designs for rover applications called for “an actuator with a titanium gearbox and dry lubricant capable of operating at -135 degrees C without a dedicated heater.”  However, following 3 life test failures, MSL switched to a heated gearbox design with wet lubricant.  Actuator development and production associated with other risk factors delayed the launch of NASA’s Curiosity rover for 2 years, further justifying the importance in perfecting the complicated design adjustments.  Many of the gearmotors required customization in the form of nonconventional coatings, and bearings to cope with demanding requirements while catering the end use for the motors.

Still, in the face of new discovery, even our most trusted and tested solutions for one mission require further innovation for others. NASA wishes to use rovers to explore even colder and icier locations such as Jupiter’s moon Europa.  This requires hardware that can withstand such temperatures without heaters.  For the sake of continuity, gearbox applications can run dry and unheated through the implementation of Bulk Metallic Glass (BMG) Gears.  The development of Bulk Metallic Glass Alloys specifically for gearboxes “make them tougher than ceramics and twice as strong as steel, with better elastic properties than either…combined with greater wear and corrosion resistance.”

These alternatives are defining our capabilities as many of our most recognizable materials do not hold up to the standards needed for deeper space missions.  In gears, bearings, and other mechanical components, traditional steel is subjected to corrosion and normal wear, both causes for replacement, an option that is not readily available in space.  Therefore, NASA relies on other alternative breakthrough innovations, such as Nitinol 60, a non-magnetic, shape memory alloy.  This lighter material does not rust or dent, yet maintains a high degree of dimensional stability with potential to be used in a variety of applications.

For the purposes of our introduction into PT space applications, these intriguing examples only scratch the surface of this topic. The list of new technologies and developments is so vast that NASA offers “Standard Commercial Licensing agreements” for partner companies to produce and ultimately sell products derived from NASA’s patented technologies.  This is one way space technology is constantly changing our day to day lives here on Earth.

Closer to home, the private sector is leading the way with new milestone achievements, opening the door to an industry completely devoted to space travel.  Computer modeling and artificial intelligence are pushing technological progressions farther and faster than any previous time in our history.  Motion + Drives will continue to highlight the variety of topics surrounding mechanisms in space, and we will investigate companies developing the most technologically sophisticated equipment on Earth.  We hope you enjoy it.

Update: Since Ingenuity’s maiden flight on April 19, 2021, the helicopter is on its 14th flight.  Seasonal shifts on Mars are creating less atmospheric density than originally tested, and once again, NASA is approaching unprecedented territory.  The rotors will need to spin faster than any of the test flights performed here on Earth, and the entire system including the electrical, will be pushed into unknown territory.  The thinner Martian air is just one more example of our ever-changing understanding of space environments along with the maximum reliability functions of our PT applications. 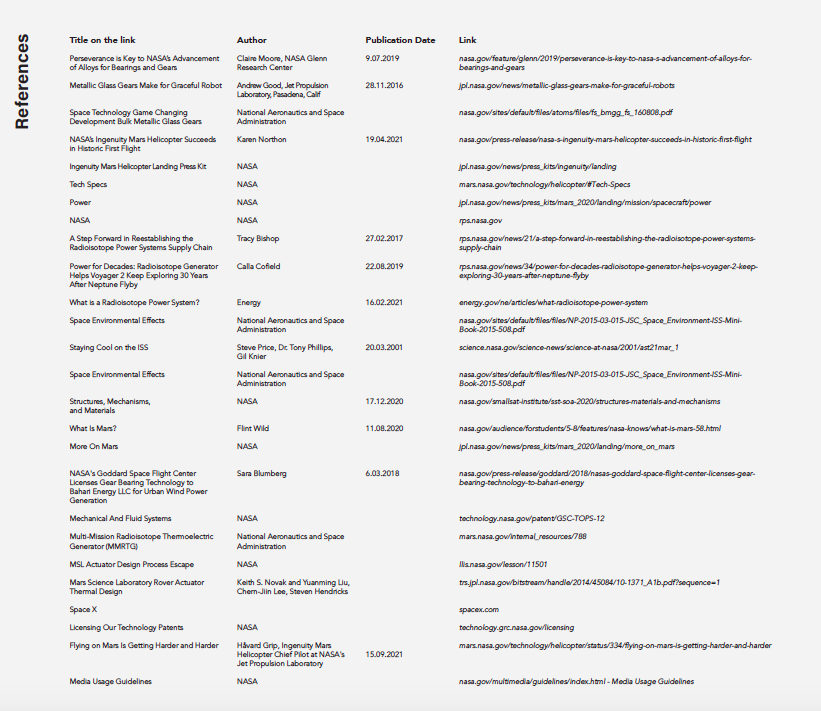 This article is published in MOTION+DRIVES Oct-Nov-Dec 2021 issue.
Download the .pdf version or Read the eMagazine

The influence of rolling bearing profiling on Rigidity and Rating Life